With Wimbledon going on, millions of people will be settling down to watch the tennis. Some though won’t be doing it due to their love of an intricate back court rally or body serve but because they are lusting over the male and female athletes on court. While a daydream in front of the television is as close as most of us will get to these hot tennis stars, for celebrities it’s rather a different matter – as they themselves often have the looks, cash and general pulling power to pull an ace. So to see which celebs took courtship a little too literally, here are ten celebrities who couldn’t resist dating tennis stars.

Kournikova’s tennis never quite matched her celebrity – she never won a tournament, despite making it into the world’s top 10. However she was one of the world’s most famous and most lusted after women during her heyday in the late 1990s and early 2000s. The first inkling we got that the Spanish crooner may have snagged the tennis star was when she appeared in his video for his track Escape. 14 years later, and despite rumours of a split, the exceptionally private couple seem to still be going strong. 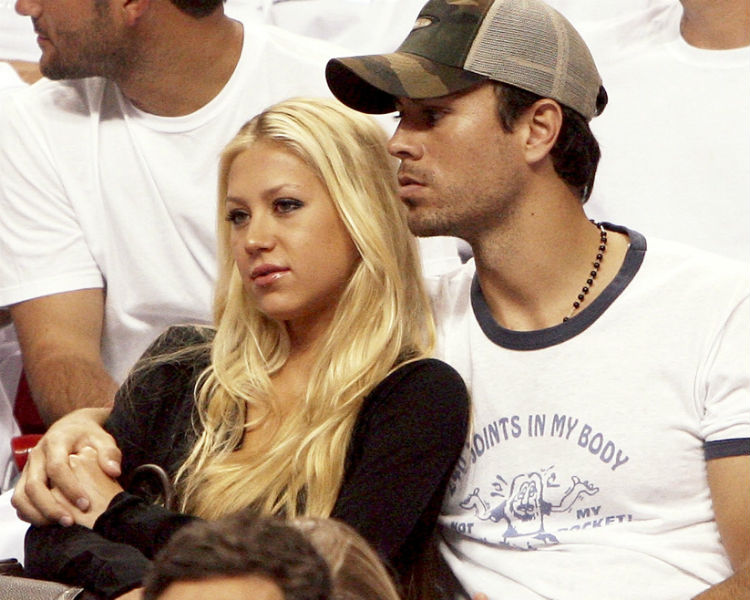 LMFAO star Redfoo seems a strange one to be attracted to the tennis, after all his most famous hit is called Party Rock Anthem – not something which would go down well on the hallowed lawns of Wimbledon. However the star has often turned up at SW19 to support girlfriend Victoria Azarenka. Once in the world’s top 10, the Belorussian tennis star has slipped down the rankings due to injury and split with her party rocking boyfriend in 2014. She’s come back though, and is now in the top 30 players in the world again. 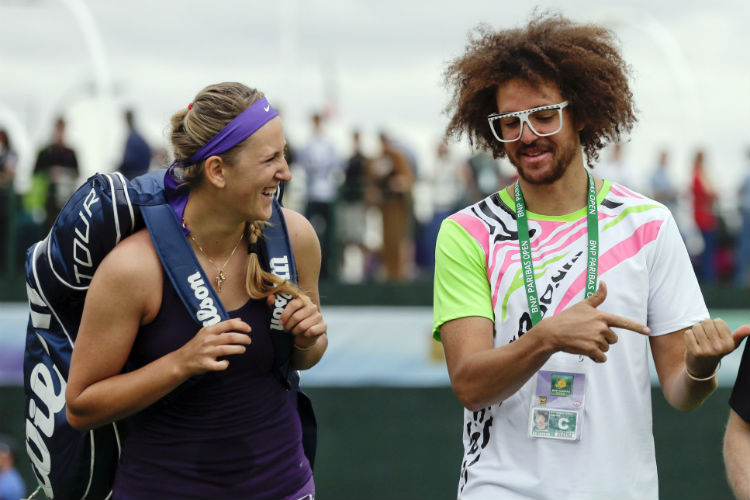 McIlroy and Wozniacki were once sport’s golden couple – bot world number ones in their respective sports of golf and tennis. The pair dated from 2011 to 2014, and even got engaged. However they called off the relationship with McIlroy saying that he was not ready for marriage. Wozniacki’s woes were on court ones as well during that time, as she slipped down the rankings. She’s since got herself back into the Top 5, and formed another sporting super couple with NFL star J.J. Watt. 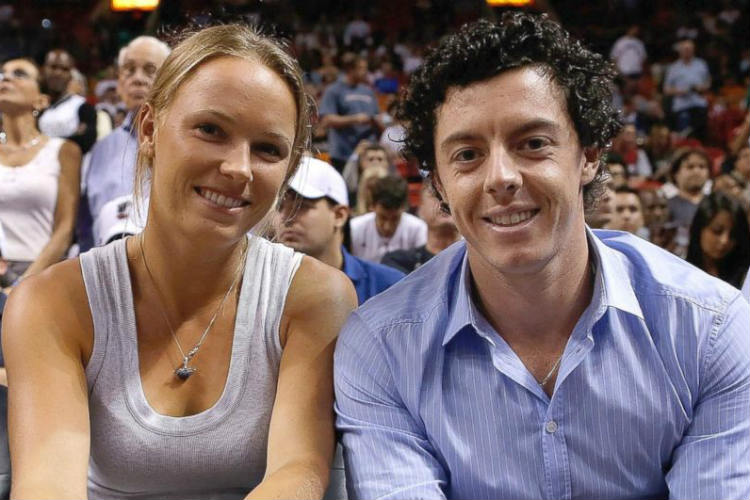 Maroon 5 star Adam Levine was rumoured to be dating teenage superstar Sharapova in 2005, a year after her Wimbledon win. The tennis star was only 17 when she won in SW19 and they reportedly hit it off when he serenaded her at her 18th birthday party. At the time Levine’s band Maroon 5 were inexplicably one of the world’s most popular bands with hits like ‘She Will Be Loved’ clogging up the airwaves. Since then Levine has had a string of high profile relationships and got married in 2014, meanwhile Sharapova has found love with tennis player Grigor Dimitrov. 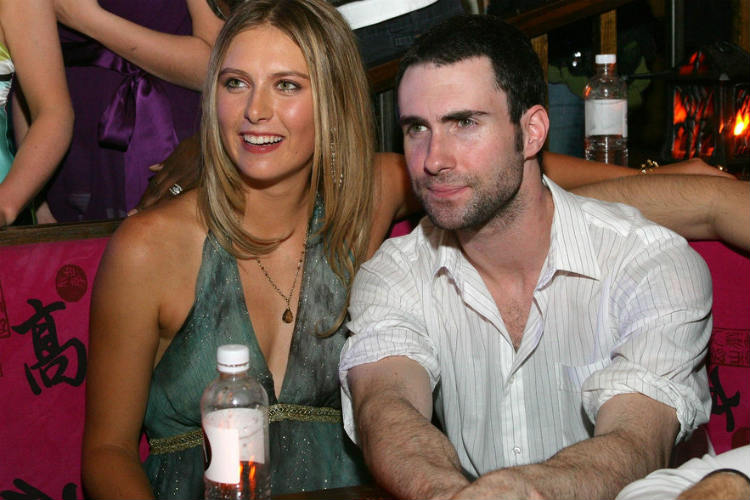 Serena Williams may just be the greatest woman to have ever played tennis so she’s anything but common. As for her former boyfriend, well he was, because it was his name. Common, who’s been in the music business since 1992, is one of few people to own a Grammy and an Oscar, which he won in 2015 for the song ‘Glory’, which appeared in the film Selma. That’s nothing on Serena though, who now owns 20 major trophies, third on the all-time list. Common admitted that when he split up with Serena, it was her who dumped him. However they’ve remained on good terms and sparked rumours of a reunion when seen during this year’s awards season. 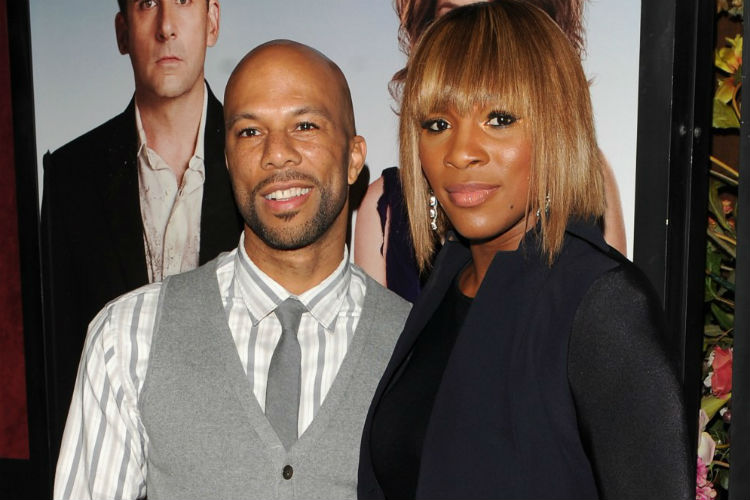 Shields and Agassi were in the 1990s the perfect match of Hollywood and tennis. In fact Agassi then was a player with a bit of Tinseltown about him, with his long hair and outlandish clothes marking him out as different. Shields and Agassi were married from 1997-99 but reportedly had a tempestuous relationship due to it coinciding with a difficult period in his life. The tennis legend even apparently smashed up his Wimbledon trophy in a jealous rage at one point. Happily, Agassi found wedded bliss and maturity with fellow tennis legend Steffi Graff and went on to shed his brattish image (and outlandish hair) to become one of tennis’ beloved elder statesmen. 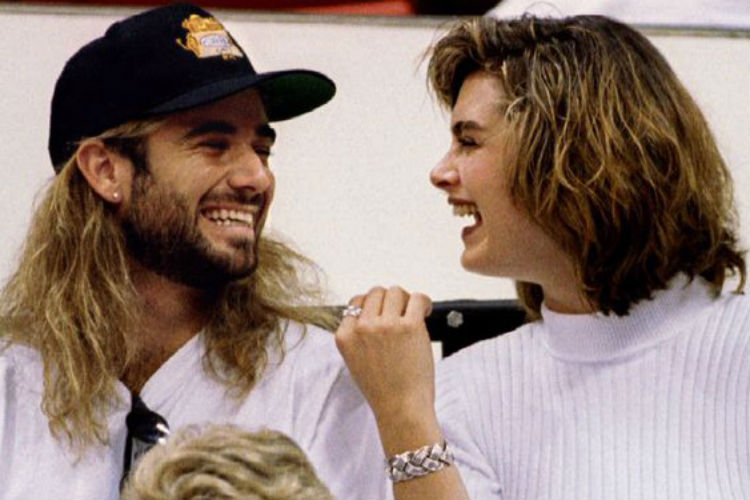 German World Cup winner Schweinsteiger has been seen in SW19 this week supporting girlfriend Ana Ivanovice, with the pair forming another sporting golden couple. The Bayern Munich star has won pretty much everything there is to win in football, and he’s well matched with Ana who’s a former world number one tennis star and 2008 French Open winner. Sadly Ana won’t be adding to her trophy haul at Wimbledon this year as she lost in the second round, still with football still in its off season, the couple could spend a romantic few days in London. 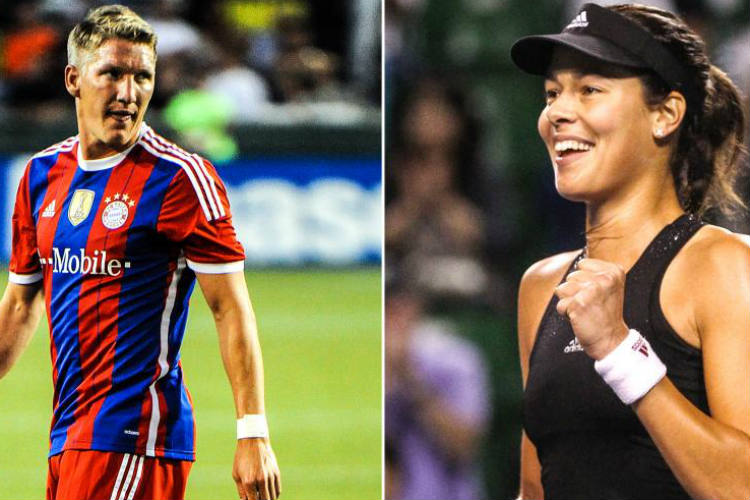 Brooklyn Decker rose to fame in Sports Illustrated magazine as a swimsuit model in 2005, and appeared on the cover in 2010. In 2007 she started dating Roddick, the last American man to win a grand slam tennis tournament. Roddick must count himself among tennis’ most unlucky players as when he was a youngster he was tipped to dominate the sport with his huge serve. Then he ran into Roger Federer – who went on to beat him in four Wimbledon finals, including the longest ever. Still, with Brook on his arm things can’t be too bad. 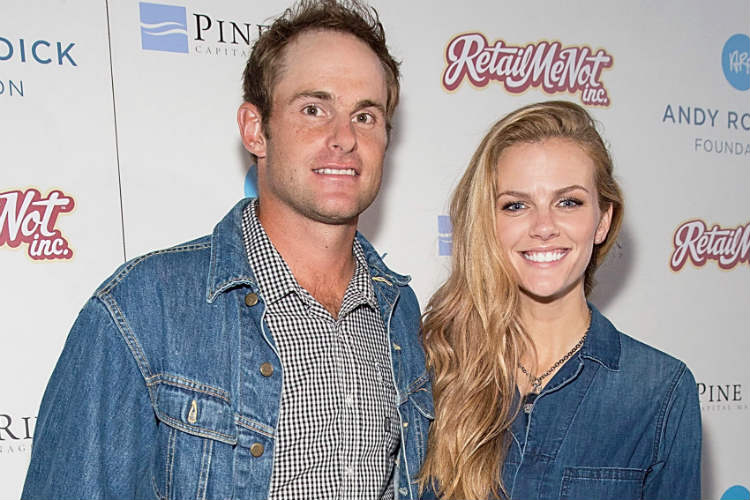 Actress Tara Reid consolidated her fame in the American Pie films as Vicky. In 2004 she found someone to serve some up for her as she was rumoured to have begun dating big hitting Australian Mark Philippoussis in 2003. The Aussie tennis star, who”s nicknamed ‘scud’ after the missiles due to his powerful serves, also dated American actress Jennifer Esposito and as we shall see with number ten, is a magnet for celebrity relationships. He even looked for love in a reality show in 2007, when he appeared on ‘Age of Love’, a TV show which saw him date two groups of differently aged women dubbed ‘kittens’ and ‘cougars’. 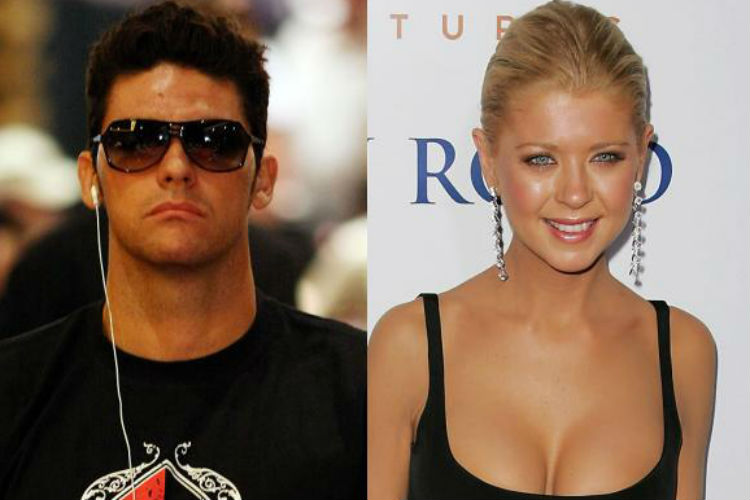 Ladies man Philippoussis also had a more publicised relationship with Aussie singer Delta Goodrem – a romance which reportedly hit the rocks after Paris Hilton claimed that she had shacked up with the underachieving tennis star. The ‘Born To Try’ singer was reportedly heartbroken at newspaper reports which indicate that the American heiress was texting round pictures of Philippoussis topless saying that he was her new man. One thing can be said about Philippoussis – his love life is certainly more complicated than his tennis ever was. 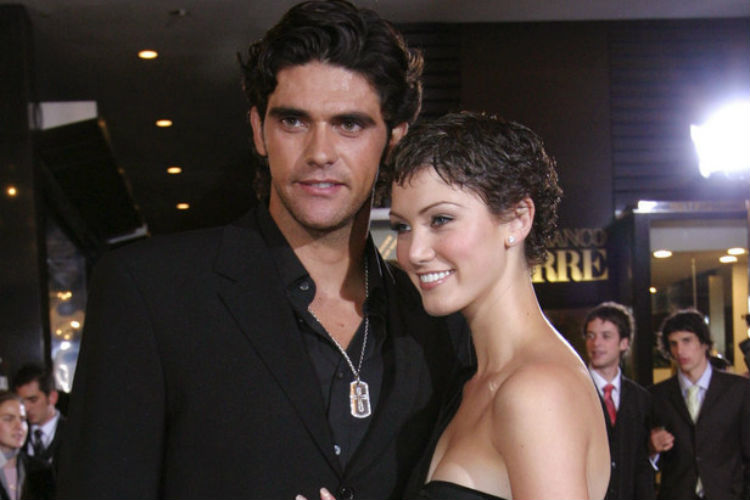